A petrified forest in the Mwaluganje Community Elephant Sanctuary, Kenya

The Mwaluganje Elephant Santuary is a community owned and managed ecotourism venture close to Kenya's South Coast that provides a corridor for movements of elephants between the Mwaluganje Forest Reserve and the Shimba Hills National Reserve. The area has large amounts of petrified wood. This was first reported more than a century ago but no further attention has been given since; indeed, the original reports seem forgotten. Apparently, many permineralized large trees have been removed in the past decades; however, there still are plenty of small fossils of unrecognized value. Local stones used for road construction include parts of fossil gymnosperm trees! We were given a few small samples of presumed petrified wood by the management to check if they were genuine fossils. Analysis of those samples in cooperation with Prof. Dr. Herbert Süß (Museum für Naturkunde der Humboldt-Universität, Berlin) and PD Dr. Ronny Rößler (DAStietz, Museum für Naturkunde, Chemnitz) showed that they are 200 million years old and, to our great surprize, represent three previously undescribed species belonging to a new genus, now described:


(Three new fossilized woods of the morphogenus Primoginkgoxylon gen. nov. from the Triassic of Kenya)

Three permineralized gymnosperms from the Late Triassic Mazeras Formation (Duruma Group, Mombasa Basin) are described and, based on their ginkgoalean wood structure, referred to the newly erected morphogenus Primoginkgoxylon gen. nov. (P. crystallophorum, P. muthamii, P. shimbaense). These petrified samples are three-dimensionally preserved and come from the fluvial-deltaic Mazeras Sandstone outcropping along the course of Manolo River in the Mwaluganje Community Elephant Sanctuary/Shimba Hills, SE Kenya. The site has not been systematically investigated but appears very rich in fossils and, as pointed out in the concluding remarks, deserves for more extensive study.

Petrified wood is an important element of the heritage of Kenya (cf. websites of the National Museum in Nairobi and the Kenya Wildlife Service ). Another Kenyan petrified forest has been found the Sibiloi National Park in the far north of the country, near Lake Turkana, but these fossils are 'only' about 7 million years old. To present knowledge, the fossil wood at Mwaluganje is the oldest ever found in the country, dating back more than 200 million years. They help to understand the history of vegetation, climate and palaeoenvironment of the area. It is also very likely that fossilized remains of animals will be found in the course of a more detailed study, in particular because the quality of the fossilization seems to be exceptionally high.

Not only for scientific reasons but also for sustainable development of Mwalugaje for wildlife conservation, as a tourist attraction, and as a source of income for the local population, the petrified forest needs to be studied, protected and properly preserved for future generations.

Being chemoecologists and entomologists, unfortunately, the FZI has failed to raise funds for studying the fossils of Mwaluganje Community Elephant Sanctuary. Thus we can only strongly suggest that others pay close attention to the petrified forest. For those able to take study of the site forward, we offer our assistance [contact].

Main actions, coordinated and documented by the Warden, should include:

Following such basic inventorying and protection, a thorough professional palaeontological study is required, ideally including excavations - very likely such studies will lead to exciting news on the evolutionary history of fauna and flora of the region. 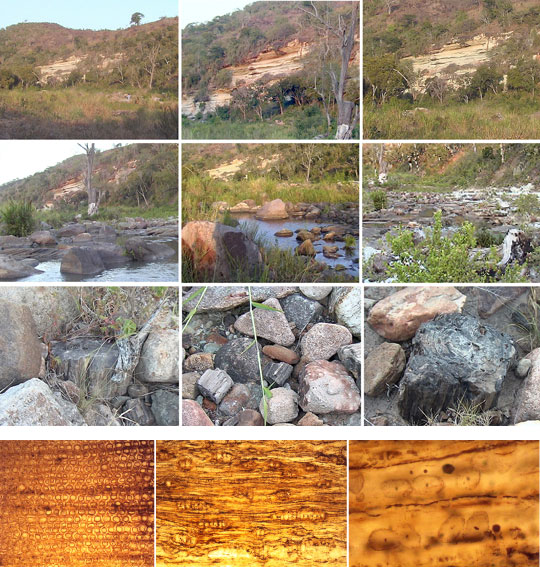 Context of Primoginkgoxylon:
It remains difficult to determine permineralized fossils of ginkgoalean affinity since they are much rarer than ginkgo-like leaf compressions. Several taxa have been introduced but only two morphogenera, Baieroxylon Greguss, 1961 and Ginkgoxylon saporta emend. Süß, 2003 are clearly defined. From the Permian onward Baieroxylon is widely distributed and reported from Europe, Central and South America, Africa, South, Middle and West Asia. Ginkgoxylon has been applied for fossil wood of ginkgoalean affinity from the Mesozoic of Europe, India, Central Asia and Africa, the Tertiary of Europe, North America and India up to the Quaternary of Southeast Asia. Recently new ginkgoalean wood remains were introduced as Ginkgoxylpropinquus hewardii Savidge, 2006 from the Late Triassic Chinle formation of Arizona, USA and Pecinovicladus kvaceki Falcon-Lang 2004 from the Upper Cretaceous of the Czech Republic. The latter also shows facies-associated Nehvizdya obtusa leaves of known ginkgoalean affinity. The newly described Primoginkgoxylon represents an interesting combination of diagnostic anatomical characters, including intrusive growth of tracheids, helical thickenings, crystals in the tracheids, and crystalidioblasts.